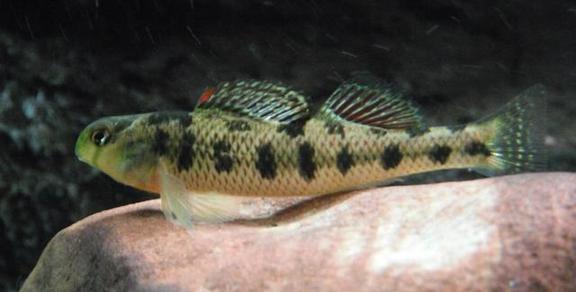 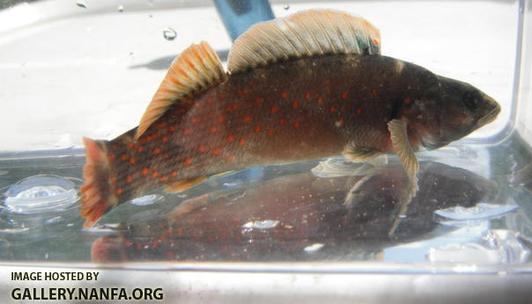 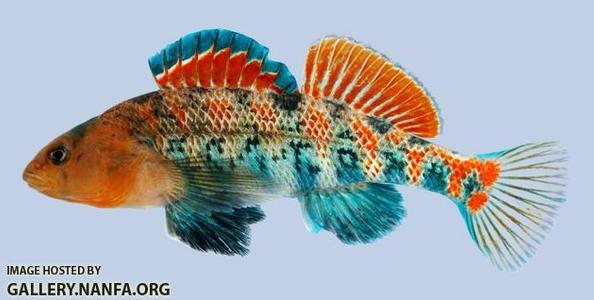 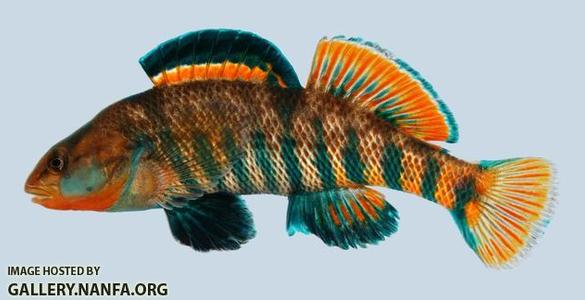 Welcome to Kentucky Creeks.  dedicated to the beauty, diversity, and conservation of the waterways within Kentucky. 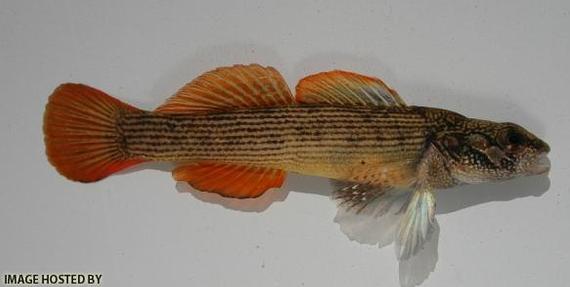 Darters are small, benthic fish that live in creeks, streams, and rivers.  They are members of the Perch family.  Kentucky is the home of over 80 species of Darters.  Some are common and some are near extinct.  You can find darters in small headwater creeks down to large rivers.  The point of this page is not to cover all darters, but to showcase some of the more common darters that are found in KY.  To find darters in your area, KDFWR has a terrific website with county/quad information as well as links to photos and NatureServe information about the specific fish.  Browse darters near you @ http://fw.ky.gov/kfwis/speciesInfo/speciesInfo.asp

Rainbow Darters typically inhabit creeks and small rivers of moderate gradient and riffles composed of coarse gravel and rubble.  They are sometimes the most abundant darter under such conditions, and are captured with a greater variety of other darters than any species with the possible exception of E. flabellare.  Their abundance is a good omen for the presence of a variety of small fishes. (1)  In Kentucky, Rainbow Darters are commonly found in most river drainages throughout the state.  They are less abundant in Western KY.  They are very colorful and make great tank mates, as they retain a lot of their color.  Males become exceptionally colorful during spring spawning season.  Grows to 3inches.

The Orangethroat Darter inhabits slow to swift riffles of headwater streams with sand, gravel, rubble, or bedrock substrates, it occasionally enters spring runs or is found in pools or quiet backwaters.  It is most abundant in alkaline waters and seems to avoid rivers with powerful currents.  In central Kentucky we have observed E. spectabile to occur in spring-fed first order streams and limestone-bedded second-order streams to the exclusion of E. caeruleum.  (1)  Similar to the Rainbow Darter, the Orangethroat Darter is a very colorful fish.  The anal fin of the Orangethroat Darter will likely lack any orange/red coloration, and this is an easy way to distinguish it from the Rainbow Darter.  Also, these two species will likely not co-exist in the same stream.  There are several variations of the Orangethroat Darter found in Kentucky.  Grows to 3inches.  Differences in DNA, scales, coloration, etc… separate the difference species.

A variation of the Orangethroat Darter, found in headwater creeks and 2nd order streams in multiple drainages in central KY, including but not limited to the middle Cumberland River, upper Salt River, and upper Green River.  Grows to 3inches.

Etheostoma blennioides is widely distributed in a variety of habitats but most often is seen in medium-sized to large creeks and small rivers supplied with gravel or rubble-strewn riffles.  Greenside darters do not enter tiny creeks, and when present in rivers are relegated to the margins and heads of riffles.  (1)  Greenside Darters are commonly found throughout Kentucky, becoming less common in Western KY.  Males are very colorful, showing green bands and blue/red on the fins during spawning season, but not as colorful in the aquarium setting.  However, they make peaceful tank mates.  A larger darter that can grow up to 7inches.

The Fantail Darter occupies riffles with gravel or rubble substrate in streams of first through eighth order…  In large streams it is found in shallow areas away from main currents.  In tiny streams it may sometimes be scooped from beneath riffles that have virtually ceased to flow… it tolerates low oxygen levels for short periods, greatly aiding its survival during low flow.  (1)  Widely distributed throughout Kentucky.  This darter is commonly found in streams with low water quality.  If this is the most common/only darter found in the section of stream, it is likely that the water quality is low and other fish/darters will not be found.  Fantail Darters are not colorful, but have a unique pattern in the tank.  Grows to 3 1/4inches.

The Stripetail Darter usually is found in small shallow streams with rocky substrate and moderate gradient.  In riffles it is found where rubble offers good protection.  (1)  Sister species to the Fantail Darter.  In Kentucky, E. kennicotti is found in the upper Cumberland River, upper Green River, upper Rough River, and in the Clarks, Tradewater, and Pond River drainages.  Grows to 3 1/4inches.

The Logperch exploits a variety of habitats...it may be found in large rivers and along sandy beaches of lakes.  The species is not found in small streams which lack chutes and strong riffles. (1)  The Logperch uses its long snot to overturn rocks when looking for food.  It’s a large darter growing to 7inches.  In Kentucky, this darter is widely distributed.  I have normally seen the Logperch in pools and deep, slow moving runs in mid-large rivers.  Logperch are also known to chase small flies/lures while fishing.  May not be suitable for a stream aquarium with lots of current, would prefer a large tank with driftwood for cover and low current.

Etheostoma zonale typically lives in rivers and large creeks of moderate gradient.  Substrates of coarse gravel to rubble are preferred.  The species is best sought at depths exceeding 25cm, ordinarily at or adjacent to midchannel, except along the margins of extremely swift riffles. (1)  In Kentucky, the Banded Darter is common in many river systems, including the Red River, Licking River, upper Kentucky, Rockcastle River, and Buck Creek.  Usually found in or near deep, swift riffles.  During spring spawning the male Banded Darter will have brightly colored green bars.  The Banded Darter is a great tank mate in the stream style aquarium. It Exhibits good color in captivity.  Grows to 3inches.

E. virgatum is common in second-, third-, and fourth-order creeks, where it usually is caught along protected banks or on sloping bottoms at depths of less than .5m.  In many areas it occurs in flat-bedded streams that flow over limestone but is also common in streams flowing through sandstone or shale regions where pools are scoured to somewhat greater depths. (1)  The Striped Darter is only found in the middle Cumberland River drainage below the falls.  Common in Rockcastle River, also found in Buck Creek and Beaver Creek.  Males are colorful during the spring spawning period.  They make good tank mates showing color and unique patterns.  Grows to 4inches and one of my favorite darters.

E. sanguifluum is found in medium sized streams and rivers.  Occupies moderate to swift currents of riffles with pebble, cobble, and bolder sized substrate.  In Kentucky, the Bloodfin Darter is found in the middle Cumberland Drainage, including: the Rockcastle River, Buck Creek, and the Big South Fork.  A beautifully colored darter, especially in the spring spawning season.  They are likely found with the Bluebreast Darter and do appear similar. The Bloodfin will have a more pointed snout than E. camurum.  The Bloodfin Darter is hardy and does well in the stream style tank.  It maintains good coloration in the aquarium.  Grows to 3 1/2inches.

The Bluebreast Darter almost always lives in medium sized to large rivers in moderately swift riffles with substrate of coarse gravel, rubble, or even boulders.  Turbid streams with riffles partially impacted with silt and sand are not likely to harbor this species.  (1)  E. camurum is a colorful darter with dark bands, red spots, and blue on the throat area.  In Kentucky, the Bluebreast Darter is found commonly in the upper Kentucky River, Rockcastle River, and Buck Creek…among others.  Males retain color/pattern well in an aquarium. Also, some alpha-males can be territorial and chase others in captivity.  Grows to 3 1/2inches. ​

The Orangefin Darter is locally quite abundant in small to medium sized clear streams over gravel substrate.  It is confined to riffle margins in the Green and Barren rivers proper.  Among the Nothonotus darters only E. rufilineatum so readily enters and thrives in creeks (1).  The Orangefin Darter is found only in the Green River system, including the Green and Barren Rivers in Kentucky.  Males are very colorful year round.   They retain their color well in the aquarium and fare well in the stream style tank.

The Variegate Darter is most often found in rivers and their larger tributaries.  It never enters creeks as small as those still occupied by its relative the Greenside Darter, let alone those ever small streams… (1). The Variegate Darter is a large, colorful darter that is common in the upper Kentucky including the Red River and the Licking River.  It prefers larger streams and fast, deep, riffles.  E. variatum is brilliantly colored during spawning season.  In an aquarium, the Variegate Darter is moderately colored and are not aggressive.  Grows to 5inches.​

The Speckled Darter most characteristically is found in clear, medium sized streams with moderate gradient but has been occasionally taken from sluggish murky streams.  It can be found below riffles (1).  Males are very colorful during spring spawning.  They lack coloration the rest of the year.  In Kentucky, they are common in the Rockcastle River and Buck Creek.  Also found in the upper Green River, upper Barren, and Clarks River.  This species has been split and is now two species; The Bluegrass Darter in the Green River drainage and the Warioto Darter in the Cumberland River Drainage. A small darter, growing to 2 1/2inches.  E. stigmaeum will not show good coloration in the aquarium.  They are also more fragile than other darters and do not fare well in an captivity.

The Redline Darter is easily the most abundant Nothonotus of the Cumberland and Tennessee basins, favoring large creeks and small to medium sized rivers…taken over a variety of substrates including clean gravel, rubble, and exposed slabs with scattered rubble.  In bigger streams with powerful currents Redline Darters typically are found in shallow graveled margins of riffles (1).  The Redline Darter is a colorful darter that does well in the aquarium.  In Kentucky, it is found in the middle Cumberland River drainage in the Big South Fork, Buck Creek, and Fishing Creek.  The Redline Darter is a great tank mate and retains most of its color in captivity.  Grows to 3 1/2inches.​

The Gilt Darter inhabits fairly clear rivers of various size.  It favors moderate current from the middle to lower portions of clean gravelly riffles and may also be found in clean pools with moderate current.  The Gilt Darter seems to be a dwindling species throughout much of its range (1).  In Kentucky, the Gilt Darter is found in the upper Green River, Licking River, and the Big Sandy River.  Gilt Darters are very colorful, especially in the spring.  They prefer deep riffles with a high volume of water flow.  They are difficult to capture, and are best seen by snorkeling.  The retain some color in captivity and do well in a larger aquarium.  Grows to 4inches.

The Kentucky Snubnose Darter occurs most commonly in clear streams with substrates of fine to coarse gravel.  In the Green River it may be taken from shallow portions of riffles when gravel habitat is available.  In small streams this darter is common in unsilted pools (1).  The Kentucky Darter is found only in the Green River.  A snubnosed darter that is very colorful.  They retain good colors in captivity and do well in an aquarium.  Grows to 2 1/2inches.​

The Johnny Darter has been taken in streams of various size, gradient, substrate, and clarity.  It is not a riffle species and is most frequently encountered in small to medium sized streams of moderate clarity, where it lives in pools over sand or solid bedrock (1).  In Kentucky, the Johnny Darter is common and generally distributed throughout the state.  The Johnny Darter does not show bright colors like many other darters.  It also does not do well in the aquarium.  It is fragile and usually will not live long in captivity.